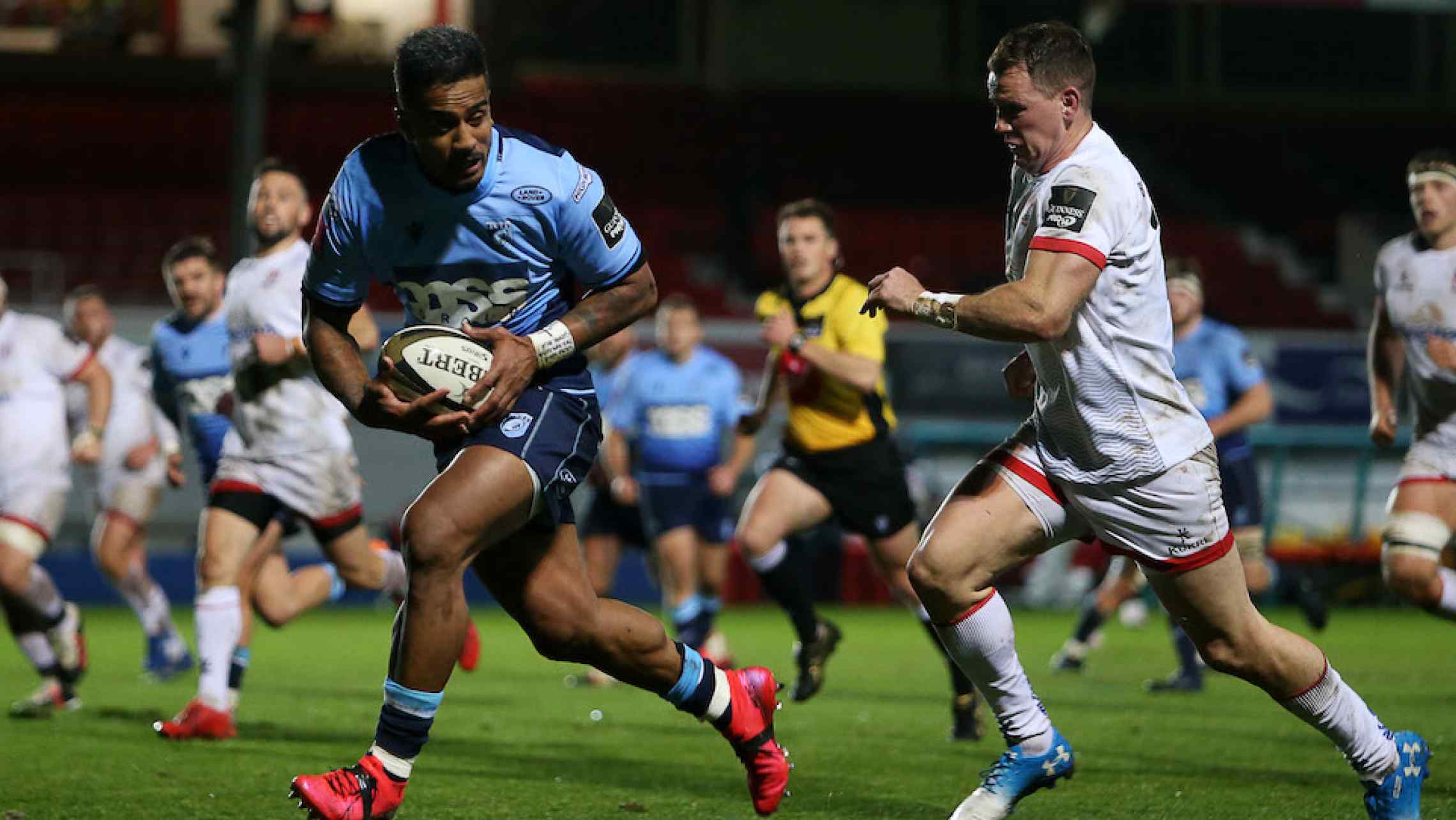 Cardiff Blues fell to a second successive defeat as we went down to Ulster on Monday night at Rodney Parade, but managed to secure a losing bonus point to maintain second place in the Guinness Pro14's Conference B.

John Mulvihill had initially made two changes to his starting XV from the side that lost to Munster the previous week, with Josh Turnbull and Will Boyde returning to action in the back row, but was forced into a late third change when Willis Halaholo failed a fitness test and Garyn Smith got the nod in midfield.

Although there was an early chance out of nothing as Lewis Jones hacked a loose ball through from an Ulster lineout, Billy Burns was on hand to snuff out any danger and from there it was almost 18 minutes of the away side camped in our 22.

Cardiff Blues' defence was excellent on our own try line and kept the Irish side at bay superbly, with notable interventions from Will Boyde and Matthew Morgan, and in the end John Cooney was only able to offer his team three points off the tee despite all the possession and territory.

From there the hosts were able to exert some pressure of their own as first Morgan kicked smartly into the Ulster 22, and then made up a break from first phase possession, before the ball was spilled in contact a phase later. However, the visitors were unable to properly clear.

On the next first phase opportunity Garyn Smith was able to put Will Boyde through a gap in the opposition defence brilliantly and powered into the 22 before being brought down. Quick ball brought Jarrod Evans into play and his left-foot chip kick was perfect for Rey Lee-Lo to run onto and score, with Evans adding the extras.

With that score done though it was back into our own 22 for Cardiff after Corey Domachowski had tackled off the ball in midfield, and that's where we would stay for the rest of the half as the referee Sam Grove-White awarded Ulster 10 penalties in a row over a 15-minute period.

They knocked repeatedly on the door, even seeing Olly Robinson yellow carded shortly after coming on for James Botham, repeatedly opting for scrums in order to get over the try line, but the home defence stood up brilliantly until finally Michael Lowry went on a mazy run to score an unconverted try right on half-time for a 7-8 lead.

Early in the second half the referee started awarding Cardiff Blues penalties again, with Will Boyde over the ball and the away side going off their feet, but Jarrod Evans missed the opportunity to put us back in front off the tee.

This was then followed by two opportunities to attack in the Ulster 22, but more spilled possession in contact and then some disorganised breakdown work as part of a directionless red zone attack allowed the Irish side to get off the hook easily.

Cardiff defended another attack from the away side in our own 22 successfully, Josh Turnbull effecting the turnover this time, but a serious head injury to Rey Lee-Lo caused the game to grind to a halt. The Samoan centre's head collided with the hip of Stu McCloskey while making a tackle and although he was briefly unconscious and stretchered off, he was sat up and smiling in the dressing room after full-time.

That disrupted the home side's flow somewhat and necessitated a midfield reshuffle, so when Scott Andrews didn't roll away Ulster were able to extend their lead by three thanks to John Cooney off the tee.

With Jason Tovey on at fly-half, Jarrod Evans playing with one good leg at inside centre and Garyn Smith returning at outside centre having been subbed off earlier in the half, the attack faltered in the final 15 minutes of the game with Cardiff Blues pushing for a winning try.

Some inaccurate passing and a touch too much kicking, alongside a strong Ulster exiting and kick chase game, meant John Mulvihill's men were frustratingly unable to get back on the scoreboard and were once again left to rue points left on the field that could prove crucial at the end of the season.

Although a losing bonus point is valuable, and not many teams will come away from games against Ulster with points this season, if Cardiff Blues want to be qualifying for the Pro14 play-offs then winning games like that at home will be key.

There are positives once again as the set piece and defence were on top form, but the clinical edge deserted us when we needed it most. Let's hope it's back for an important game against Edinburgh at Murrayfield next Monday.