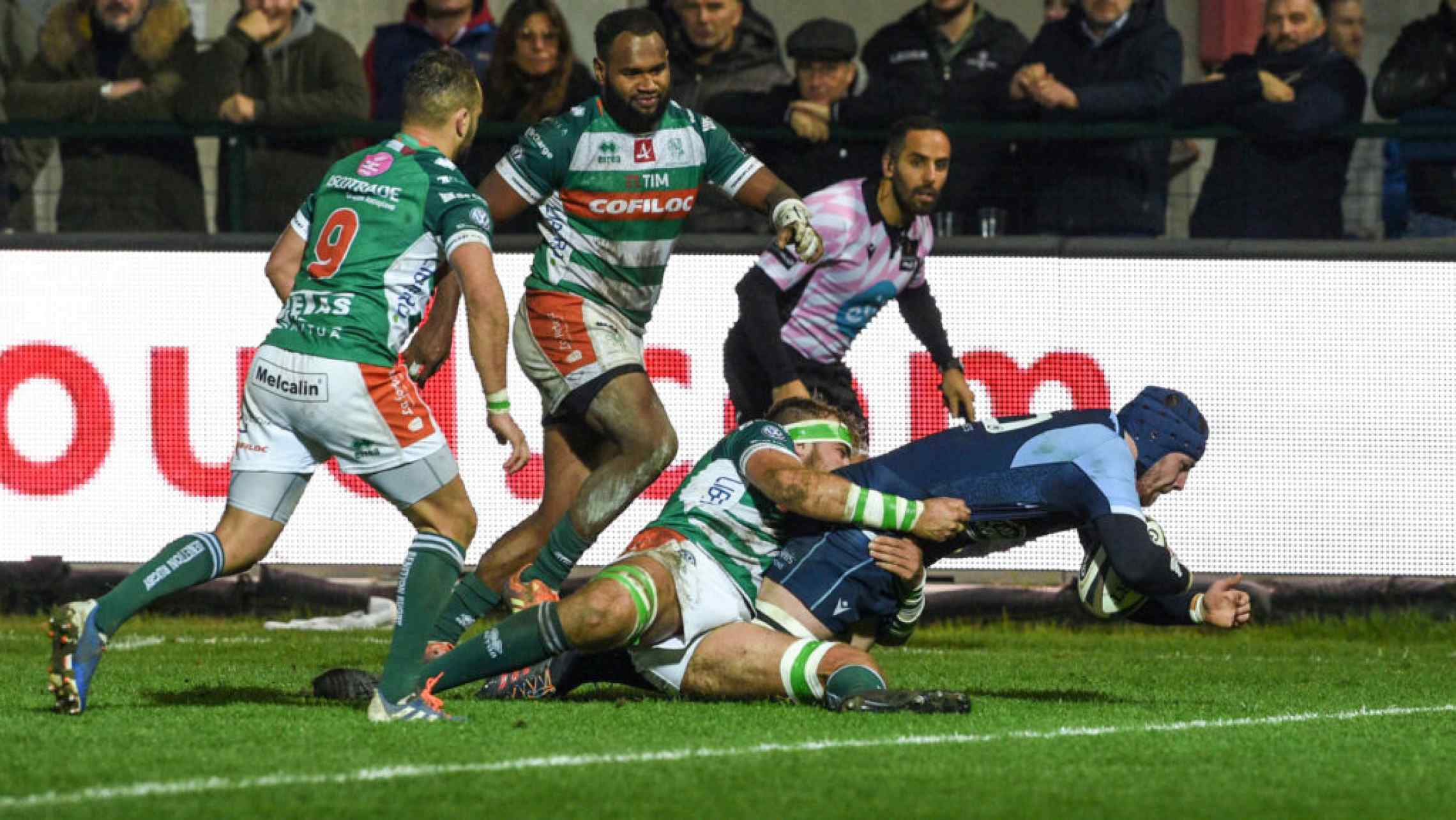 Cardiff Blues upset all the odds on Saturday as we returned to Guinness Pro14 action with a stunning bonus point win over Benetton in Treviso.

The list of unavailable players leading into the game was quite incredible, with Dillon Lewis, Seb Davies, Tomos Williams, Jarrod Evans, Josh Adams and Owen Lane involved in the Wales squad, while 11 players were on the injury list including Corey Domachowski and Nick Williams after the previous game.

That unavailable list was then added to when Liam Belcher dropped out of the squad shortly before kick-off, replaced on the bench by Ethan Lewis, and it seemed like all the absentees were going to hit us hard when a full-strength Benetton dominated the first 10 minutes.

Struggling to get out of our half, Cardiff Blues had to rely on some try saving work from Jason Tovey, Rey Lee-Lo and Matthew Morgan, as well as the work over the ball of Will Boyde, in order to escape just three points down from the boot of Tommaso Allan.

On the back of that we managed to gain some confidence though, and when Lee-Lo was tackled in the air it allowed us to work into the Benetton half, earning a second lineout right on the five metre line and pushing over with James Botham in possession for his first Pro14 try.

Both sides were pushing to get the all-important next score, with handling errors allowing a counter attack each, but neither resulted in a try although that was only thanks to Morgan, Aled Summerhill and Josh Turnbull linking up to prevent the dangerous Monty Ioane scoring in the corner.

Unfortunately the next mistake came from Cardiff Blues as we were turned over trying to exit from our own 22, and although the goal line defence was admirable, the persistency and power of the home side told as Marco Riccioni got over from close range,

A Benetton maul collapse allowed us to even the scores up at 10-10 almost immediately, but with five minutes to go until half-time the home side strike brilliantly, faking a move to the openside of a scrum before number eight Toa Halafihi fed Ratuva Tavuyara on the right wing and he was quick enough to make it over in the corner.

Allan missed the conversion to keep the scores level at half-time, but was successful off the tee just after the break as the second half started in a similar manner to the first, with the hosts dominating possession and territory but only coming away with three points to show for it.

Once again Cardiff Blues hit back though, first unsuccessfully when Rey Lee-Lo broke through but chose not to find Macauley Cook on his outside shoulder, and then successfully when Lloyd Williams, on his 30th birthday, sniped down the blindside of a rolling maul to score in the corner.

Unfortunately as the game approached the hour mark it seemed that a quickfire Benetton double would put the game beyond reach of the brave visitors.

First Monty Ioane latched onto the end of a Dewaldt Duvenage kick, after Ignacio Brex had broken through midfield, before Federico Zani sprinted off the back of a rolling maul to get over the line for a bonus point try.

Despite Tommaso Allan missing both conversions, at 28-17 down with 18 minutes to go the writing seemed to be on the wall for Cardiff Blues, but from the kick-off there was a stroke of good luck as a Benetton touch on a return kick from Lloyd Williams gave us good field position.

Two attacking sets field to yield any points, but back-to-back penalties against the home side earned them a warning and allowed Cardiff Blues to keep the pressure on until a maul split and Alun Lawrence was in possession to take advantage of the gap and score his first try for the club.

Now a four-point game the final 10 minutes were extremely tense, as possession went back and forth, in-part thanks to some marginal refereeing decisions that were seemingly starting to go against the away side.

However, one that did go our way was in the 78th minute when Jason Harries won a penalty over the ball and Jason Tovey kicked us down into the Benetton 22.

Six phases of attack came and went as the home defence held strong, but on the seventh phase a moment of sheer magic from Rey Lee-Lo saw the Samoan beat three men and offload one-handed for Harries to go over the try line and under the posts.

A superb moment and just reward for a hard working and battling display, coming from behind three times to stay in the game and snatch it at the death, the final try earning a bonus point just to add an extra sweetener to the affair.

Tovey kicked the conversion, his 11th point of a 100% kicking display, to take Cardiff Blues back to South Wales with five points and the most unlikely of triumphs, but one that can hopefully kick start what has been an underwhelming campaing thus far.

The resurgence continues next week as John Mulvihill's men host Pau at the Arms Park in a European Challenge Cup tie, so get down to CAP and support the boys!