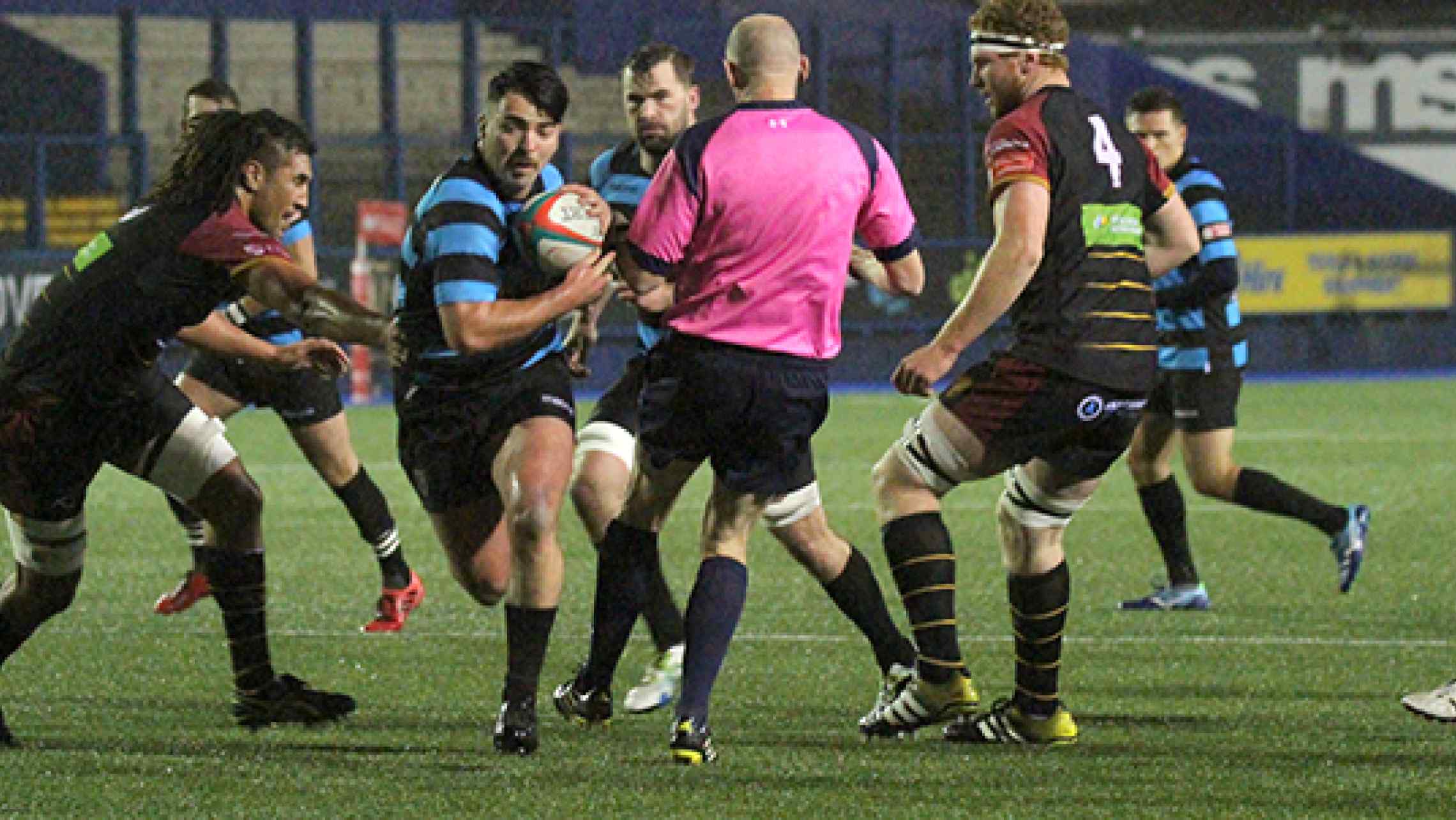 Cardiff RFC made it six wins in a row and kept up a challenge to make the top four of the Principality Premiership by Christmas with a weather impacted victory over RGC at the Arms Park on Friday night.

Head coach Steve Law made five changes to his team that beat Aberavon last time out, with Callum Bradbury injured, Rory Pitman having left the club, Ben Thomas and Max Llewelyn unavailable and Gareth Thompson dropped to the bench, James Murphy, Morgan Allen, Will Rees-Hole, Adam Jones and Steffan Jones all got the nod.

And it was one of the new faces, in centre Rees-Hole, who opened the scoring as he cut a beautiful out-to-in line from the midfield off Martin Roberts at scrum-half to ghost through a gap in the RGC defence, put the referee on his backside and go in under the posts. Steffan Jones converted for an early 7-0 lead.

The conditions were always going to play a huge part in the game and so it proved as handling was an issue for both teams, although Cardiff shot themselves in the foot with some poor kicking when awarded penalties and in open play.

As the half wore on RGC got more of a foot in the game, assisted by a referee not interested in allowing any contests on the floor or ensuring that attacking players stayed on their feet at the breakdown, but also by a Blue and Blacks defence that struggled with the first up tackles.

They were close on three occasions, camped inside the Cardiff 22 for long periods, but could not organise a coherent attack close to the line as the visitors seemingly could not decide whether to stick with a close driving game or move the ball a bit wider.

Eventually they were forced into route one playing when RGC kicked the ball to the corner and rumbled over from close range. Evan Yardley the man who crashed over at long last for the visitors, Billy McBryde converting off the post.

Within five minutes they were ahead from a Cardiff error as the front row were penalised for a pre-engagement at the scrum, and away scrum-half Efan Jones tapped quickly.

He drew one defender, McBryde drew the second defender and allowed Aron Wyn Evans to fly down the left wing, beat Ioan Davies and hold off Morgan Allen for an excellent score in the corner.

The conversion was missed but RGC still went in 7-12 up at the break as they dominated the final 30 minutes of the half, but over the interval the rain abated and some inspiring words from Steve Law picked the Blue and Blacks up.

A concerted effort to kick cleverly and play a territory game built pressure on the visitors and when Martin Roberts put them into the corner, and the lineout went astray, Cardiff sensed a try.

Patient attack orchestrated by Roberts got the Blue and Blacks quickly around the corner, and eventually Adam Jones had enough wriggle room to get low and drive over the line from a yard out.

One of the cornerstones of the Cardiff game this season has been the scrum, and the front row of Fraser Young, Joey Tomlinson and Peter Lloyd once again anchored the second half performance with a dominant set piece showing.

Steffan Jones nudged the hosts into a three point lead from the kicking tee, and then put us into the corner as the Blue and Blacks backed themselves to convert territory into tries.

A perfectly organised catch and drive ended up with captain Tomlinson getting over the line at the back of the maul, and suddenly Cardiff had opened up a 10-point lead in the mid-point of the second half.

Despite that comfort, never put it past a home team at the Arms Park to shoot themselves in the foot!

Will Rees-Hole tried to chip and chase from inside his own 22 with no cover, and although the charge down was pounced on by Matthew Powell, there was still an RGC penalty two come.

Fortunately, two brilliant pieces of last-gasp defensive play saw Tomlinson knock the ball loose with a strong tackle and Morgan Allen produce a superb example of maul defence as he destroyed the Gogs drive and even ripped possession from them.

At this point Scrum V Live decided to give up on broadcasting the game and instead show an incredibly dull programme about Denmark, of all places. However, while those of us fair weather supporters at home discovered Scandinavia, those at the ground watched the hosts hold on to a lead.

Another Jones penalty made the score 25-12, but a second try for Aron Wyn Evans and an excellent Billy McBryde conversion made it a tight game with a few minutes to go.

Cardiff RFC managed to hold on though and make it six wins in a row in the Principality Premiership, joining Llandovery and Carmarthen on 35 points, one point behind second place Pontypridd.

Next week Steve Law's men travel to 13th placed Bridgend, who's game this week at Bargoed was called off due to the weather. Get down and support the boys if you can, come on Cardiff!