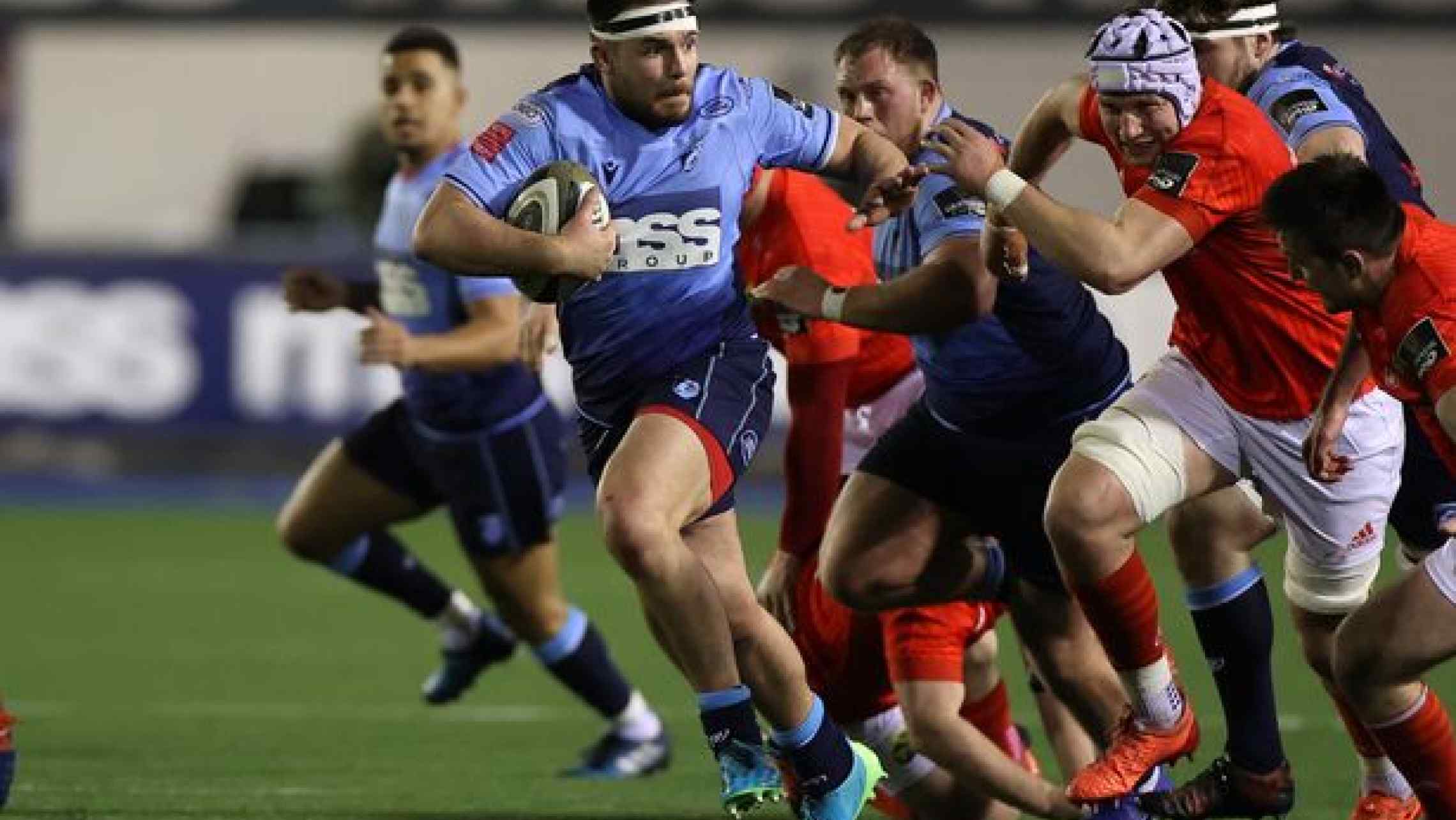 Dai Young was forced into three changes from the side that took the field against Connacht with Rhys Carre and Lloyd Williams retained by the Wales squad so Corey Domachowski and Jamie Hill started, while Jason Tovey was ruled out with a head injury so Ben Thomas lined up at 10. Two tactical changes saw Kirby Myhill in at hooker and Mason Grady make his first league start at outside centre.

It was Munster who started the better, showing off their power and the speed of ball it creates to twice go through attacking sets in our territory, but a superb turnover from Shane Lewis-Hughes and then a smart interception from Jamie Hill relieved pressure, and then Kirby Myhill pounced on an overthrown lineout to set up an attack.

Cardiff smelled a bit of blood and Mason Grady was the man to strike as he made a blistering line break into the opposition 22. He was pulled down but after a few phases setting up the second wave of attack a long flat pass from Ben Thomas put Seb Davies through a gap for the opening try of the game.

From hero to villain for Seb though as a few minutes later he was pinged for a dangerous entry to a breakdown and shown a yellow card for referee Adam Jones, with Munster putting the home side under a bit of pressure with the man advantage.

Fortunately some strong defence kept them at bay with Ellis Jenkins making a big tackle, Rey Lee-Lo winning a turnover and then Jenkins re-appearing with a big rip in contact. In the end though the visitors were able to get on the board when JJ Hanrahan took three points off the tee.

Back up to a full complement of players Cardiff headed back on the attack with Owen Lane flying through a gap in midfield to make 50 metres, and when the Irish side went off their feet Ben Thomas was able to add three points to the score, but straight away Hanrahan kicked a penalty of his own to keep it a two-point game at the break.

The interval came at a good time for Dai Young's men as we re-grouped to start the second half fast, going through a lengthy attacking set before Munster were offside and Ben Thomas added three more points with a superb kick from distance.

However, from there the visitors started really started to take control of the encounter. A poor clearance kick from Cardiff allowed the opposition to run the ball back into our half, before a Hanrahan chip-and-chase took them into our 22. There was then a sense of inevitability as their forwards started carrying close to the breakdown and Jean Kleyn was the man to power over.

Hanrahan converted but from this point on the game became a bit scrappy, with both sides hitting the post with penalties and then a series of scrums during which Munster and Cardiff were penalised as the refereeing team didn't offer much in the way of consistency.

It was nip and tuck with Cardiff desperately trying to get a crucial score but overstretching ourselves in attack allowing Chris Cloete and Gavin Coombes the opportunity to secure important turnovers, especially disappointing after a second superb Mason Grady break of the game.

Then in the final moments Munster were able to kick up to the edge of our 22 from a penalty and drive a maul over from distance with the touch judge able to spot a grounding in amongst the pile of bodies. Joey Carbery's conversion took a losing bonus point away from Cardiff as the game finished 20-11.

For a second week in a row Dai Young's men were in the game going into the final 15 minutes but just didn't have the game awareness to get into a striking position when it mattered, and as a result hopes of finishing in the top three look very distant now.

However the showings of Jamie Hill and Mason Grady in the backline, another first team debut this season, this time for Theo Bevacqua, and the continuing amazement that Ellis Jenkins' return from injury is creating, are all positives to take forward into two huge games against Benetton and Edinburgh in the race for fourth.