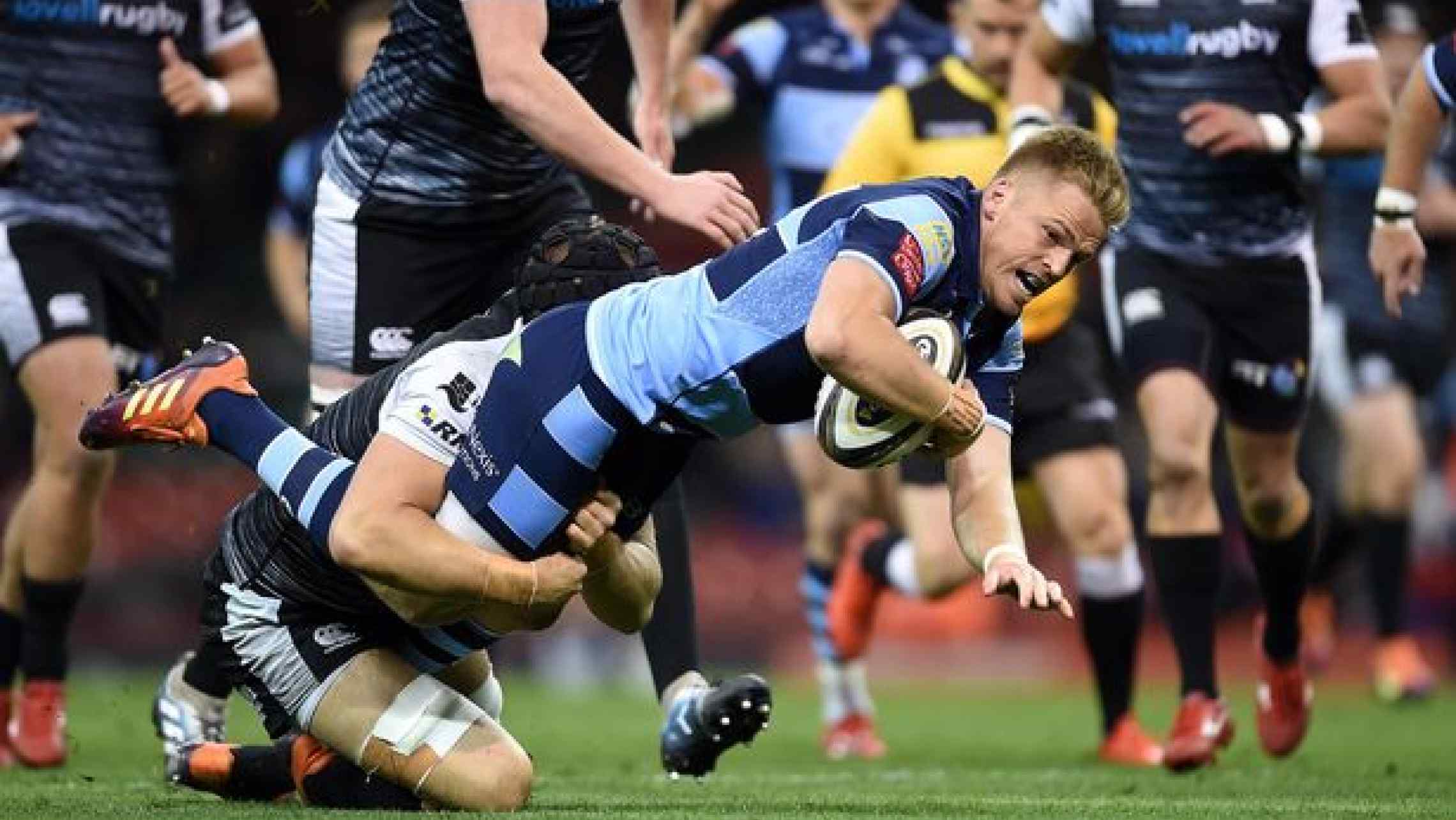 It was winner takes all at the Principality Stadium, with John Mulvihill welcoming back Nick Williams, Jarrod Evans and Aled Summerhill to his starting XV, while Lloyd Williams was preferred to namesake Tomos at scrum-half.

The 'away' side on the day got the scoreboard off and running with an early Sam Davies penalty, but it was Cardiff Blues who bagged the first try of the game inside six minutes and, as has so often been the case this season, it was from a first phase set play.

Excellent dummy lines from Willis Halaholo and Rey Lee-Lo allowed Owen Lane to drift across from his right wing to break through a huge gap in midfield, before finding Lloyd Williams tracking on his inside. He took away one more defender before finding Gareth Anscombe on the switch to finish brilliantly after stepping past three players.

Playing full-back on the day, Anscombe converted his own try and then kicked a penalty to extend the lead after the Ospreys were penalised for using their hands in the ruck, although just into the second quarter of the game Sam Davies pulled those three points back when Olly Robinson was pinged for offside on a kick chase.

After a thrilling game between Dragons and Scarlets preceded it, this encounter was doing it's best to match that, with Cardiff Blues close to bagging another try when Willis Halaholo chipped through for Jason Harries, a replacement for the injured Owen Lane, but the bounce just eluded the winger.

Instead it was the Ospreys who scored next as a midfield penalty allowed them to kick to the corner, and although initial set pieces were stopped from getting over the line, eventually it was the familiar face of Cory Allen who dived over under the posts, with Davies adding the extras.

With five minutes to go it seemed the West Wales side would be offered some advantage as a Dan Evans break led to Jarrod Evans slapping the last pass down, but that line break had come due to a block from Scott Baldwin and this allowed Cardiff Blues to move forward.

A subsequent Nick Williams-won penalty allowed Anscombe to draw the scores level, but Sam Davies ensured the Ospreys went in 13-16 ahead at the break when the 'home' side were unable to clear their lines properly and infringed on the floor.

The second half started with the opposition on top, but it was brought on ourselves with a poor lineout conceding a turnover on our own five-metre line and from the subsequent attack Nicky Smith burrowing over, with Davies extending the lead to 10 points.

However, Cardiff Blues got back into the game and two big moments. Firstly, Cory Allen was yellow carded after being penalised for a deliberate knock on when there were numbers on the outside.

Then the resulting penalty was kicked to touch, the lineout lost but a huge hit from Ethan Lewis on Nicky Smith knocked the ball loose, Aled Davies and George North couldn't retrieve it, allowing Josh Turnbull to pick it up and drive forwards for a try that Anscombe converted.

Up against 14-men Cardiff Blues were pushing, but another big moment saw Jarrod Evans break and put Tomos Williams over for a try inside him, before it was called back when Nick Williams was penalised for obstructing Owen Watkin in midfield.

The yellow card period came and went as the game got stuck in a rut of the 'home' side trying to play their way up into Ospreys territory, but making a mistake or losing out on the floor, allowing the 'away' side to pin us back with a strong kicking game.

Eventually the scoreboard was added to again when Scott Baldwin was penalised for not releasing as a tackler, and Gareth Anscombe drew the scores level off the tee, before the final big moments of the game.

A brilliant chip kick from Anscombe released Rey Lee-Lo before his final pass was slapped down by Dan Evans. The full-back was sent to the sin bin, but it was not ruled a penalty try due to the distance to the try line, and then Anscombe missed the kick at goal to give Cardiff Blues the lead.

Playing against 14-men once again we could not manufacture any sort of try scoring opportunity, and lost a lineout at a crucial time to give Ospreys possession, which they eventually secured a penalty from, albeit what appeared to be a poor decision.

It was kicked but in all truth it didn't matter as a draw would not have suited us, and Ospreys now go forward to host Scarlets in the Heineken Champions Cup play-off in a few weeks.

For Cardiff Blues it was a case of 'so close, yet so far' once again, as the season came to a close in disappointing fashion. Early losses can be pointed to, refereeing decisions complained about, but when push comes to shove we just didn't get have enough to get over the line at crucial times.

Now we face a summer to find that extra few percent and while it is tough to take now, the good news is that under John Mulvihill we aren't a million miles away from being right there and competing. Stick with us, we'll get there eventually!