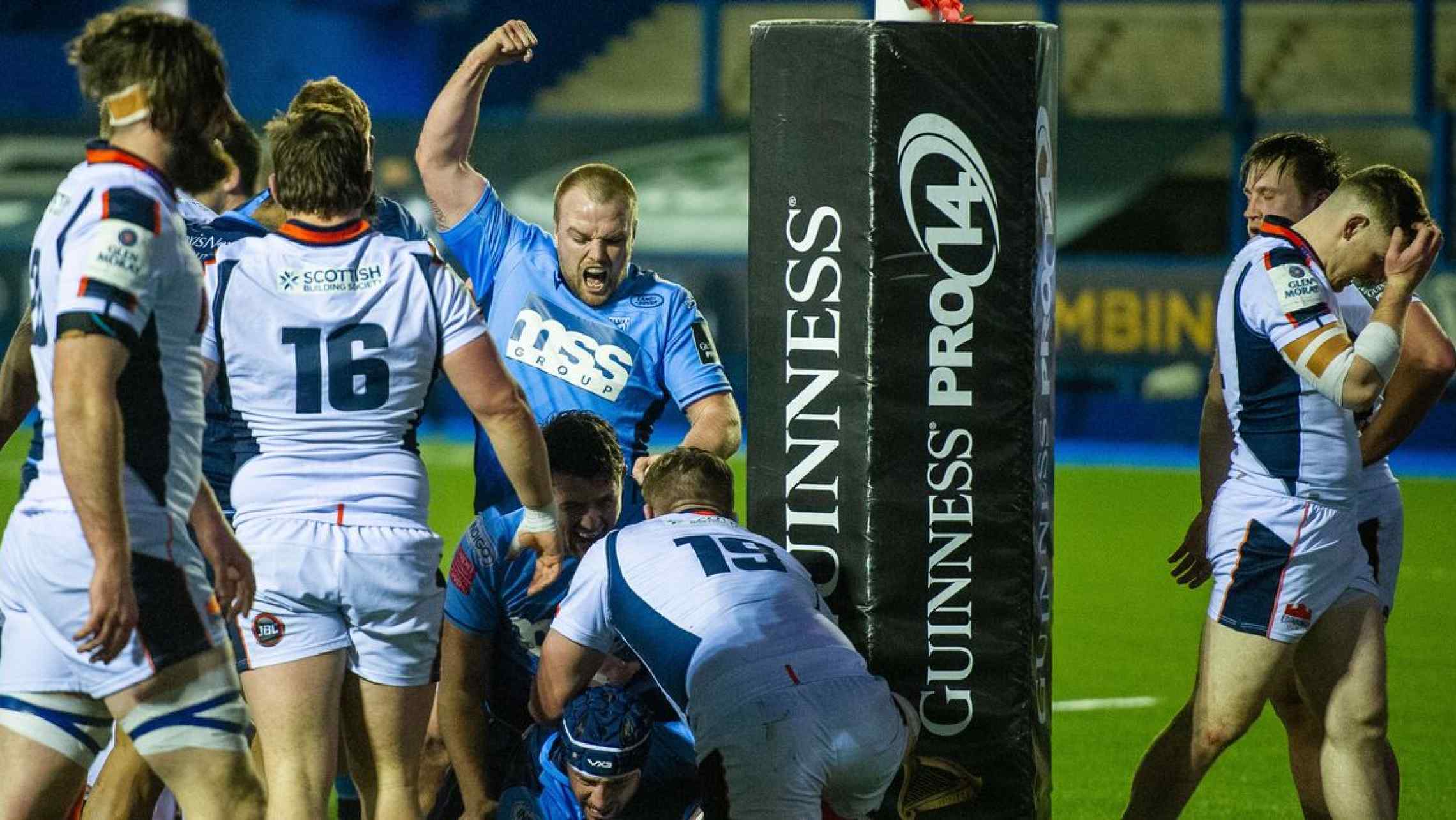 Cardiff Blues finished the 2020/21 Guinness Pro14 season in fourth place in Conference B after a bonus point win over Edinburgh at the Arms Park on Monday night.

Going into the crucial clash, Dai Young had been able to call on Lloyd Williams and Jarrod Evans to start after being released from the Wales squad, as well as Rhys Carre and Hallam Amos on the bench. There was also a return for Dmitri Arhip, and Rhys Gill made his first start of the season.

Despite those boosts it was Edinburgh who dominated the opening quarter of the game though, controlling possession and territory as Cardiff struggled to clear our lines and effect turnovers against an opponent who were bringing an energy and pace to their play we struggled to match.

Fortunately the defence was organised enough to withstand that early onslaught, and then we got a chance to go up the other end and string some phases together before forcing an infringement, but Jarrod Evans' shot at goal struck the post.

Edinburgh headed back up the other end and Charlie Savala slotted his goal kick to give the away side the lead, but Evans was successful with his second attempt at the posts and levelled the scores.

That workrate from the Scottish side was still there in abundance as they won turnovers on the floor and got the opportunity to kick to the corner. The driving maul was repelled but they worked around the corner quickly and George Taylor was on hand to ghost over relatively easily, with Savala converting.

Cardiff just could not get a foothold in the game and when the set piece started faltering, lineouts being overthrown and scrum penalties going against us, Edinburgh returned to our 22 late in the half. Taking the option of a kick to goal from a penalty they were not successful and the score stayed 3-10 as the sides headed for the sheds.

From the start of the second half though Cardiff Blues started dominating proceedings. An early penalty saw us kick to the corner and although the maul and then the pick-and-drives got us close, in the end we settled for an Evans penalty to cut the deficit.

There was a step-change at scrum-time too as Dmitri Arhip started getting the upper hand on Boan Venter, winning a big scrum penalty that took us to the corner. The lineout was stopped short again but this time to close forwards game was successful and Liam Belcher was in possession as we crashed over, with Evans converting.

With the lead under our belts it was time to turn on the style as Ben Thomas pounced on a turnover ball and headed left. Matthew Morgan spotted a mis-match and sliced through the Edinburgh defence with Aled Summerhill outside him. Luke Crosbie did well to bring the Rhondda Rocket down but he got the offload away for Rey Lee-Lo to go over. Evans added the extras.

Edinburgh weren't about to roll over though, re-discovering some of the energy and cutting edge from the first half that had deserted them after the break. Damien Hoyland got them moving with a smart break from full-back and they worked through phases quickly to allow Taylor to go over easily once again, although Blair Kinghorn couldn't convert.

Dai Young immediately turned to the bench and the replacements set about ensuring the lead wasn't going to slip. The replacement front row in particular had a huge impact as the scrum became completely dominant and Kris Dacey carried hard off the back of mauls.

The pressure inflicted on the opposition eventually forced them to infringe and with a penalty advantage Lloyd Williams and Jarrod Evans linked up beautifully with the former putting in a perfectly weighted kick for the latter to run on to and go under the posts before converting his own score.

There was just time for another close series of pick-and-gos to get James Ratti over the try line with the clock red to secure the bonus point and a 34-15 victory as Cardiff Blues confirmed a fourth place finish after Scarlets launched a big second half comeback against Connacht in Llanelli.

Dai Young's men now wait for European Professional Club Rugby to confirm how many teams will enter next season's Heineken Champions Cup, but it's a good achievement to finish where we have after the campaign was seemingly over after the New Year's Day loss to Ospreys. The future is bright!