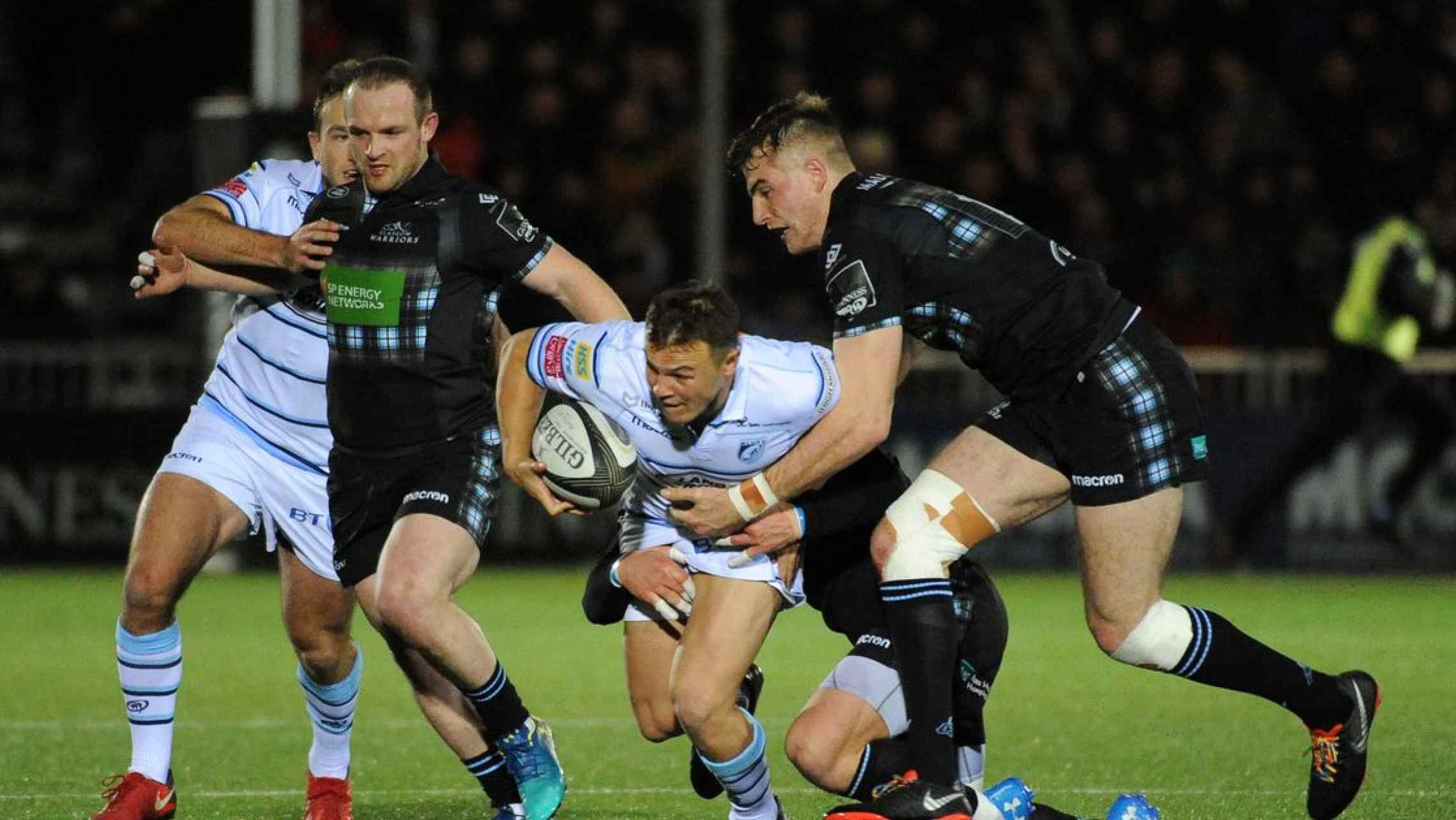 The Guinness Pro14 returned to action on Friday night for Cardiff Blues, but they'll be wishing it was still on hiatus after a dreadful first half contributed to a second heavy defeat against Glasgow Warriors this season.

John Mulvihill had been able to welcome Seb Davies and Jarrod Evans back from the Team Wales setup, while Kieron Assiratti was handed a first start of the season and Willis Halaholo returned from injury in midfield.

It would be Evans who made the first major play of the game, taking a high ball inside the first few minutes and dancing past three defenders. That attack ended when Glasgow infringed on the floor at the breakdown and the fly-half made it 3-0 after just five minutes.

The home side went to hit straight back through and from second phase play Nick Grigg wandered through a big gap in the defence before finding Ali Price on his shoulder having been released by the Scotland squad.

Tom Williams made a superb try saving tackle, knocking the ball from the scrum-half's grasp, but Lloyd Williams clearance kick did not find touch and as Cardiff Blues failed to form up quickly in defence, Tommy Seymour was able to offload for Adam Ashe to run clear.

Peter Horne converted and was back on the tee not long later after both sides traded turnovers on the floor, with Glasgow winning their penalty second and kicking to the edge of our 22 metre line.

From first phase ball Price carried to the line and when Willis Halaholo jumped out by himself it left a huge hole for Niko Matawalu to sprint through and past Tom Williams at full-back for a try on his 100th appearance. Horne made the score 14-3 and things were starting to look ominous.

Nick Williams, who was imperious over the ball throughout, won a penalty soon after the second try, but Evans' kick slid wide. Cardiff Blues dominated possession over the next five minutes but could not make any significant ground as the attack lacked any sort of spark.

Glasgow nearly got on the scoresheet with another counter attack as Horne sliced through the away defence this time, but Tom Williams was on hand again to prevent a try, this time managing to half-intercept the final pass to Price.

However, on the half-hour mark the home side were ahead again as Cardiff Blues switched off after conceding a penalty and the Warriors struck.

Stafford McDowall made the initial break with Ruaridh Jackson and Grigg in support before Glasgow captain Callum Gibbins managed to reach the try line despite attention from Evans and Josh Turnbull.

Five minutes later the try bonus point was confirmed after Cardiff Blues had once again utilised a tactic that saw them work a two-on-one overlap and then kick the ball through, offering the home side the unstructured game that they thrive off on a plate.

Jackson started a move from full-back on the left hand side of the field that eventually saw Grigg motor through a gap and find another Scotland squad member released for the game, Tommy Seymour, on his shoulder for one of the easiest tries he'll score in his career.

Cardiff Blues attempted to close the gap with some late pressure, but a solid Glasgow maul defence and some wayward lineout throwing meant the score stayed 28-3 to the home side as the teams headed for the sheds.

The second half saw the visitors keen to get on the scoreboard early but blew two try scoring chances inside the first few minutes.

First Tom Williams failed to correctly work a two-on-one with Aled Summerhill and the winger was easily tackled, before Brad Thyer tried and failed to pick and drive for the line from close range, with Seb Davies wide open and waiting just to dot the ball down not two yards to his left.

Eventually we managed to cross the whitewash thanks to a driving maul which was pushed over with the help of some backs. Kris Dacey was the man in possession as the ball made it's way into the in-goal area.

What followed was a very impressive defensive set from Cardiff Blues that pushed Glasgow back around 20 metres, and although it ended with Olly Robinson harshly penalised on the floor, when Peter Horne missed touch it seemed the tide might be turning.

Unfortunately Jason Harries managed to kick the return straight out on the full giving Warriors field position and from there they set about piling the pressure back on. Eventually the penalty advantage came and Ali Price put a speculative kick in behind that worked out perfectly for Rory Hughes to score after Tom Williams slipped.

At this point Cardiff Blues really started throwing caution to the wind and it paid dividends as Harri Millard made a sharp break on the outside, while Jarrod Evans also sliced through the Glasgow defence, but poor decisions and a lack of support brought both attacks to a premature end.

Evans managed to successfully break the line a second time on the hour mark as he took the ball from Lloyd Williams on first phase ball and brushed off a tackle before getting over the line. There was still 20 minutes left, and although an 18-point deficit being turned over was unlikely, a try bonus point was within reach.

Attacking intent continued but a stray Glasgow hand knocked the ball down and was only punished with a scrum, before a second push ended as Cardiff Blues were penalised when trying to set up a driving maul in the opposition 22.

Then from a third attack a moment of indecision saw another wrong decision made as Evans tried to throw the miracle pass to the outside and Niko Matalwalu had a 100th appearance gift from the visitors as he intercepted and cruised home for a second try of the game.

The final 10 minutes saw Cardiff Blues look to make the scoreline more respectable but minus a few potential half breaks there was little chance of ever coming away from Scotstoun with any sort of credibility after the first 10 minutes.

In truth, particularly the first half, it was one of the worst performances we have seen in recent times. We lacked the confidence to fire any sort of shots in attack when the game was tight, we lacked the intensity to run a dummy line or form up in transition play, and crucially the effort to support team-mates at a breakdown or in a half break was missing.

There is no doubt the Glasgow team was better than ours on paper, but certainly not 25 points better, and when you consider the home side took their foot off the gas in the second half, the scoreline could actually have been so much worse.

As supporters we can understand being beaten fair and square, however, lack of effort and desire to play for the jersey is really difficult to take. Unfortunately it appeared as if Cardiff Blues did not want to win on Friday night.

Add in big problems with defensive systems and a freedom to express in attack, and the coaches have a lot of work to do ahead of yet another tough game away to Ulster this coming weekend.