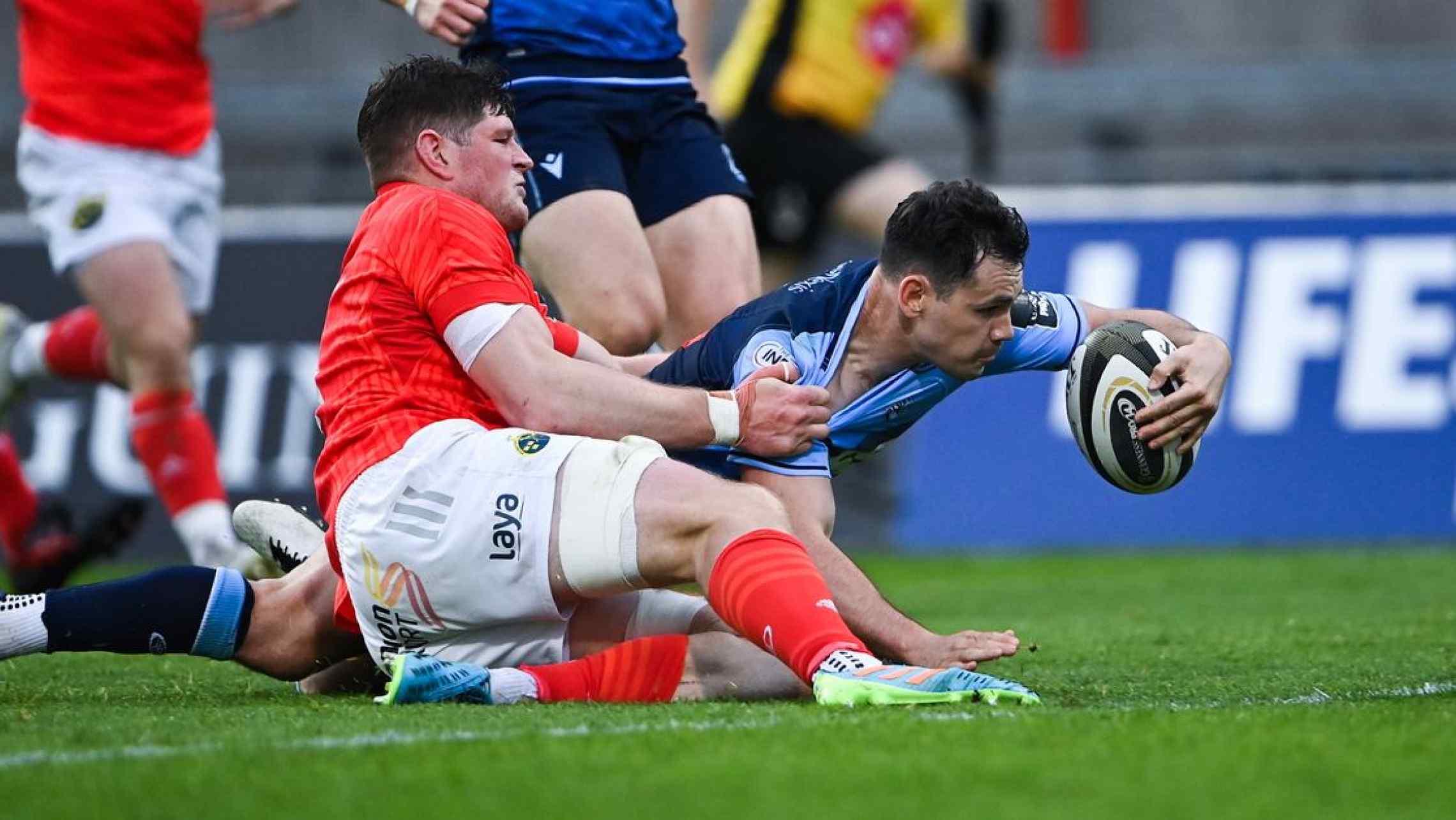 Cardiff Blues' hopes of Rainbow Cup success are over after defeat at Munster means the wait for a win at Thomond Park goes on.

After back-to-back victories over Dragons and Scarlets, director of rugby Dai Young had named a strong side to travel to Limerick, with only two changes to the starting XV seeing Corey Domachowski and James Botham start in the pack, as Rhys Carre and Olly Robinson dropped down to the bench.

Although Munster too had named a strong side featuring three players starting at Thomond for the final time, it was Cardiff who started fastest as Willis Halaholo ran a beautiful out-to-in line off the shoulder of Jarrod Evans and scorched through the defensive line before switch pass for Tomos Williams saw the scrum-half battle over the try line. Evans added the conversion.

During the remainder of the opening quarter the dominance of the away side continued, with James Botham winning a smart breakdown penalty to end Munster's only real attack, while sharp carrying from Jason Harries and Hallam Amos got us over the gain line to camp in the opposition 22, although only a penalty for not rolling away added to the scoreline.

At this point though the refereeing of the breakdown started to take a turn from the confusing to the frankly irrational, as the man in the middle Andrew Brace started being very selectively fussy over the body position of some players while quite blatantly ignoring the entry points of others.

Add in Brace marching Cardiff back 10 metres twice when frustration over the lack of consistency in decisions boiled over, and suddenly Munster were in a great lineout position which allowed their driving maul to get to work and Niall Scannell was in possession as it powered over.

Soon after the restart the visitors disciplinary issues reared their head again as Seb Davies was penalised at the breakdown, and when the Irish side went back to the corner their power game was dominant again. This time the maul was overlooked in favour of Damian de Allende driving up to the try line and then Fineen Wycherley went over Tomos Williams to score.

As half-time approached the comeback was complete as some clever tactical kicking returned Munster to our 22 and the driving maul once again got to work with Scannell grabbing a second try at the back. Joey Carbery converted all three tries to earn a 21-10 half-time lead.

Whatever that was said in the Cardiff changing room during the break worked perfectly though, as the Blue and Blacks emerged with renewed vigour early in the second half, firstly winning a turnover from a dangerous Munster driving maul, and then going up the other end where a Josh Adams carry got us going forward, Seb Davies made a line break and with Hallam Amos linking it was a second try for Tomos Williams.

Evans' conversion cut the deficit although a Carbery penalty nudged Munster out a little, before a moment of refereeing controversy as home full-back Mike Haley came across to make a tackle on opposite number Hallam Amos as he danced down the touchline. The shoulder of the tackler made direct contact with the head of Amos but Brace adjudged there was an attempt to wrap the arms and a mitigating factor in a drop of height so only produced a yellow card.

Nevertheless the man advantage was put to immediate use as an attacking set that saw Cardiff driven back at times led to us moving the ball wide for Josh Turnbull to produce a clever show-and-go and break into the 22 where Lloyd Williams was on his inside shoulder in support to go over. Evans' conversion drew the scores level.

The rest of the yellow card period could not produce any more points, but as the game entered the final 10 minutes things were nip and tuck. Jarrod Evans made the score 24-27 from a penalty after a Josh Turnbull turnover, but Munster hit back as a turnover gave them possession in our half and then the power game finished up with Keynan Knox pushing over, and Carbery adding the extras.

At this point the story becomes one of captain's challenges as first CJ Stander claimed Gavin Coombes had been blocked when trying to defend a Matthew Morgan kick return. This was, somewhat harshly, upheld but a high tackle on Morgan overruled that infringement, still allowing Munster to keep their challenge though.

Then from the resulting penalty Cardiff went to the corner but were turned over at the maul, with Josh Turnbull challenging a possible side entry from the hosts, which turned out not to be the case. The ball came back though, and after a lengthy attacking set a penalty was secured that would have allowed us to kick for the corner, only for Stander to challenge if Lloyd Williams had kicked the ball back into the breakdown.

Replays showed the ball had moved 30 centimetres, and that's how this gripping encounter finished as the captain's challenge saw proceedings come to a close on a minor technicality. If rugby wants to attract new fans then it could seriously do without killing exciting finales on minimal indiscretions, especially when the game is already complicated enough.

From a Cardiff perspective there was plenty of encouragement though. The opening 25 minutes were largely dominant, and the comeback early in the second half was particularly standout. Earlier this season we went to Thomond and struggled for 40% possession and territory, on Friday we left with 53% possession and 55% territory, with the opportunity to win in the 83rd minute.

The attack is starting to look ferocious, and when fitness matches the intended tempo the league had better watch out, with the defence still solid and the discipline improving, although not yet perfect. Maul defence has to be next on Dai Young's radar for improvement, but the steps taken in this Rainbow Cup bode very well for the future.