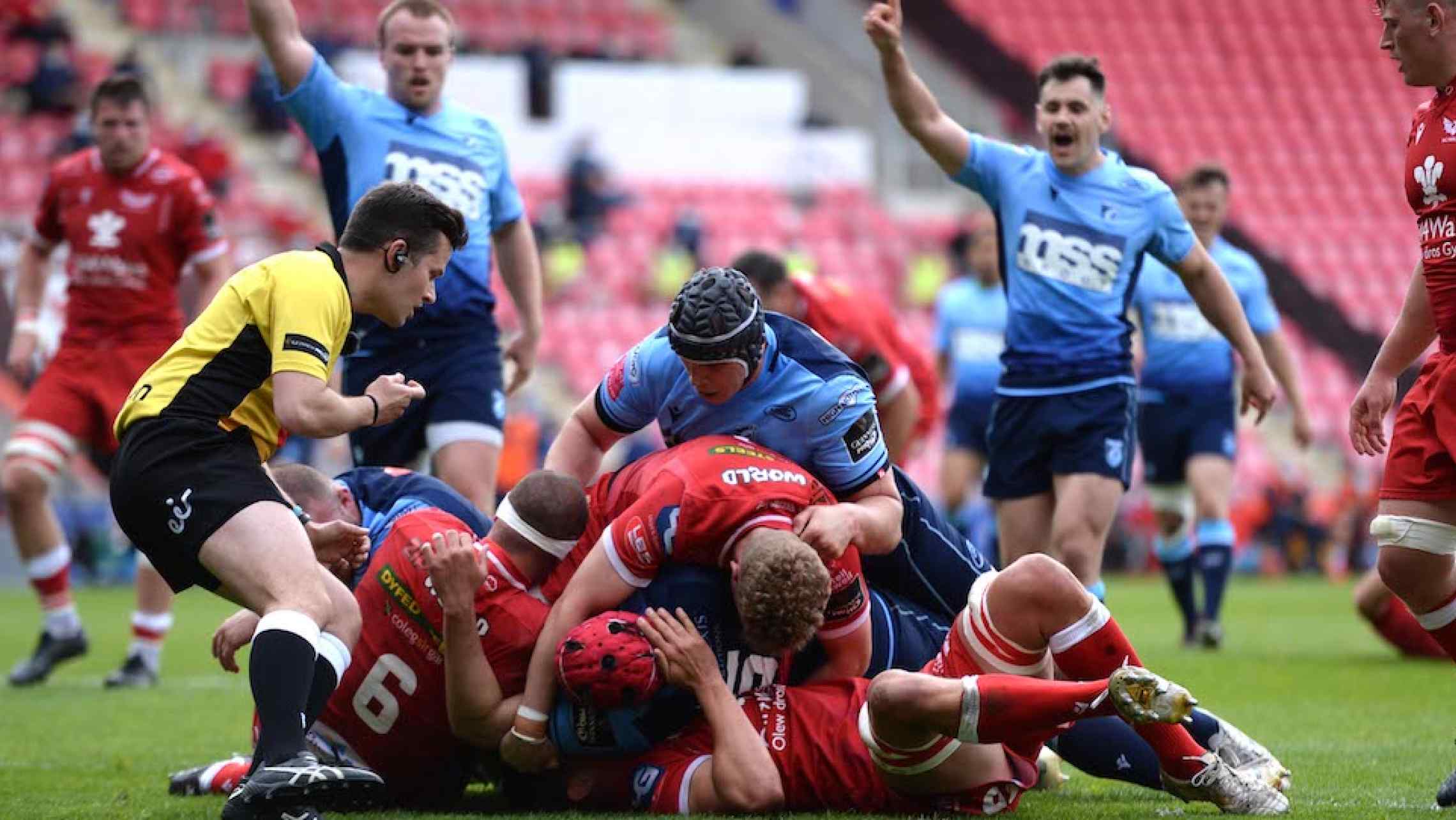 Cardiff Blues secured a bonus point win, and a third victory for the season, over the Scarlets but had to claw it out from the jaws of defeat after almost letting a 17-point lead slip.

Dai Young had called on his experienced Welsh international midfielders as Tomos Williams, Jarrod Evans and Willis Halaholo returned with Max Llewellyn and Owen Lane unavailable, while Kris Dacey and James Ratti returned to a pack looking to back up a good performance against the Dragons last week.

It was Scarlets who opened the scoring through a penalty after a Tomos Williams kick was charged down and then Rhys Carre pinged for not rolling away, Leigh Halfpenny taking three points, but from there the first half was all Cardiff.

Seb Davies and Dillon Lewis combined to win a turnover from kick-off, and off the resulting scrum a multi-phase attack saw Hallam Amos, Jason Harries, Cory Hill and Tomos Williams all make ground before James Ratti spotted an overlap on the left and Willis Halaholo found Jarrod Evans to step past Tom Rogers and score, converting his own try.

There was almost a second try in quick succession when another flowing multi-phase attacking set saw Evans, Thomas and Josh Adams combine to release Josh Turnbull on the left wing, but the captain's foot was just in touch before he could touch down under pressure from Rogers.

Instead Cardiff had to wait until the 20 minute mark when more possession and territory saw us creep into the Scarlets 22 and after some big carries from Rhys Carre and James Ratti, it was Cory Hill running a stunning out-to-in line that break the defence and powered over the try line, with Evans adding the extras.

The home side did get back into proceedings more following that second try, as the Blue and Blacks were guilty of poor discipline on five or six times keeping us pinned in our own half. Halfpenny missed one shot at goal but made no mistake with a second to cut the deficit.

As half-time approached though the clinical Cardiff attack struck again. Two carrying phases off a midfield lineout drew Scarlets defenders in, before Evans and Harries released Amos down the left wing to dummy perfectly past Halfpenny and go over for an excellent score. There was just time left for Josh Turnbull to be pinged on the floor and the home full-back make it 9-19 at the break.

The second half started largely as the first finished as a refreshed away side come out firing. Two huge carries from James Ratti either side of some deft Amos hands releasing Harries got us into the red zone, and then an inviting Tomos Williams pass was run on to by Turnbull who powered over to leave no doubt about the grounding, with Evans adding the extras.

Unfortunately over the next 15 minutes there was a noticeable taking off of the foot from the pedal as Cardiff seemed to run out of legs and the hosts were presented with opportunities to put pressure on through poor kicking, soft turnovers and more ill-discipline.

It was from a penalty for offside that Johnny McNicholl tapped and went quickly, evaded some weak tackling and got the offload away for Dane Blacker to go over against his former club. Interestingly though, Halfpenny couldn't add the extras as Jason Harries managed to charge his conversion down.

Blacker wasn't done there either, scoring a second try a few minutes later as Dan Jones got an offload away from Tom Rogers who took advantage of some more poor tackling and Blacker was running a supporting line again. Then, inside the last 10 minutes, a Jones kick through saw Angus O'Brien beat Harries to the ball and put the Scarlets ahead when he converted his own try.

From 9-26 up to 28-26 down in the space of 20 minutes, Cardiff were looking at sixes and sevens, but finally got our hands on the ball to put together a first multi-phase attacking set since the beginning of the half and pinned Jon Davies on the wrong side of a breakdown, with Jarrod Evans nudging us back ahead.

There was one final nervy moment as referee Sean Gallagher awarded Scarlets a kick-able penalty for a Gwilym Bradley high tackle, but the decision was overturned on review and the away side clung on for a win that should have been a lot more comfortable than it was.

It leaves Dai Young knowing there is work to be done in terms of conditioning in order to play the high tempo attacking style that has been implemented in the first half against Dragons and Scarlets, as well as on game management when we do take commanding leads.

Nevertheless, it is still two one-point wins that Cardiff previously may have let slip, and with a number of players impressing again, including Dillon Lewis after his slip down the Wales pecking order, James Ratti in his new position of number eight, Ben Thomas in a third position in three games and Hallam Amos after an up-and-down season, there are plenty of positives to build on.