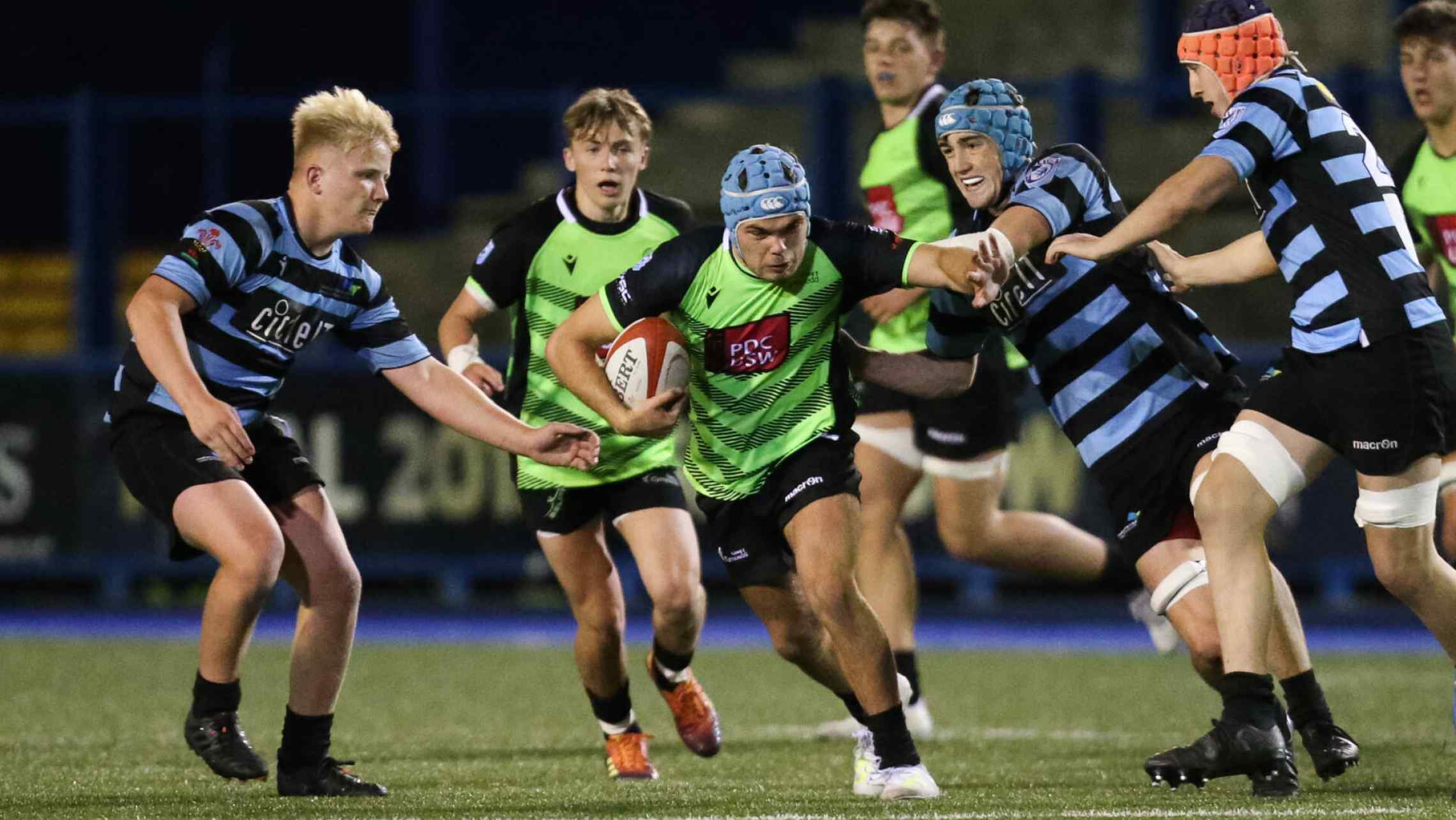 It’s been a successful month in the Cardiff Blues development pathway with plenty of encouraging results across the Indigo Group Premiership and the WRU College League.

It’s been another unbeaten month for Cardiff RFC, who remain top of the league and have made it through to the Specsavers Cup quarter-final.

A narrow 12-3 win over Ebbw Vale in dreadful conditions at the Arms Park was followed up by a 78-12 hammering of the same opposition the following week in the Cup, the most points scored by a Blue and Blacks side in one game during the semi-professional era.

Wins away at Bridgend and at home over then second place Aberavon leave Steve Law’s men 12 points clear at the top of the table ahead of the busy festive period.

Taking over in second place is Pontypridd, who started the month with some tight scorelines, falling to Aberavon by just a single point before beating Newport by just two, in-part thanks to a try from Cardiff Blues Academy scrum-half Jamie Hill.

Merthyr had also been involved in narrow scorelines at the start of the month, with single score victories over Newport and Llandovery, but came unstuck when playing Ponty in the A470 Derby at the end of the month, with Justin Burnell’s side putting in a fine performance to earn a 31-7 victory at Sardis Road.

The Ironmen did have better luck in the Cup though, overcoming Bedwas to make the quarter-finals where they host Neath, while Cardiff travel to Bridgend. Ties are to be played on the weekend of the 25th January.

Things are hotting up in the WRU College League with the four A License sides in the Cardiff Blues development pathway occupying spots in the top seven of the league.

Whitchurch High have recovered from a slow start to the season to beat Bridgend College, Llandovery College and Neath Port Talbot College, and take a losing bonus point from Coleg Gwent, in order to jump up to seventh in the league.

They are now just four points behind Ysgol Glantaf, who themselves went unbeaten through November thanks to wins over Bridgend College and Newport High School, as well as gaining a high creditable 14-14 draw against Coleg y Cymoedd.

It is ahead of them where things are getting really interesting though, with the season approaching its final few weeks.

Cymoedd and Cardiff & Vale College are currently sitting second and third, respectively, behind Coleg Gwent and just ahead of Coleg Sir Gar, with Cymoedd knowing that winning their game in hand would put them top of the league.

They have a tricky run-in though, including games against Whitchurch and old rivals Sir Gar, while CAVC have to play three of the bottom four, two of those games coming at home.

It’s going to be well worth keeping an eye on this league over the next few weeks!

It’s been a disappointing month for Cardiff University as the 1st XV have failed to register a win in November and currently find themselves second bottom of the table at roughly the halfway point of the regular season.

A defeat away at Swansea in a replica of the Welsh Varsity game was followed by losses at home to Bath and Durham and away at Leeds Beckett, but there will be no concern for the Uni who will recall a second half resurgence last season that saw them rise from the foot of the table to the play-offs.

There was more success for Cardiff Met in November though, who bounced back from a defeat at home to Durham to beat Leeds Beckett and Bath, and take a losing bonus point from Loughborough, to stay sixth in the league and in touch with the top three.

Wednesday 11th December will see the big one as Cardiff Uni and Cardiff Met meet in the City Derby at the Arms Park.