Leo Tolstoy wrote that time and patience were the two most powerful warriors - and this was surely the message ringing in the All Blue ears as they ran down the tunnel for the second half.

From a long-ranging restart James, Rush and Jenkins made ground before a grubber kick from Robinson, as delicate as a fine soufflé, brought play up to the Dream XV 22. From the resulting line out, stolen by Cook, the All Blues went through the phases and looked certain to score until a knock forward from Nugget determined otherwise. Time and patience was the order of the day. One running down, the other not in evidence. Tomos was visibly seen to chastise his over-excited forwards.

Moments later, another lineout pickpocketed and another chance to build momentum. This time Roberts drove through Nicholls and Ring, like a Stanley knife through a balloon. Navidi was next ploughing into and through John. It was heavy artillery against light cavalry. Jenkins and Filise were next. Finally, out to the backs and Jamie Robinson was too quick for a flat-footed and possibly dazed Nicholls, worked his magic and put the excellent Cuthbert over in the corner. Time and patience, one still running down, the other developing.  Conversion missed. Deficit cut. 24-18. The crowd gasped, the drum drummed, suddenly perfectly on point. ‘Hey Baby’ chimed out like a primordial battle cry.

The blue and blacks restarted with momentum clearly now in the balance. A period of aimless kicking followed, which if nothing else allowed Rayer and Blair to wow the crowd with their seemingly unfaltering telepathy. Time and patience weren’t just the reserve of the players. Finally, Rayer sliced the blue and blue defence like fine prosciutto, passing to Ring who dummied and swayed with all the poise of a Splott Nureyev. Support came from Nicholls. The laundry man from Whitchurch weaved beautiful yarns and patterns, no one able to lay a finger on him, before he drew his man and set Edwards free to cross in the corner. John's conversion hit a post, then the crossbar twice before tumbling over with the swagger of a sailor at closing time. Everyone knew he meant it and was just showing off. 31-18.

Again, the Ultimates were chasing the game. A fine restart from Robinson landed glue-like in Teeeeeeee-to's paw. A rolling maul the likes of which was rarely seen in modern times at the Arms Park followed. Tomos, screaming at the pack to give more. Nicky, hand to face plotting with the two Jamies, not a cookbook nor pre-planned move in sight. Still the maul rolled on, the blue and blacks seemingly unable to halt its merciless progress. Up to 10 metres out and the march had become a slog. An energy sapping, soul crushing slog. If an army marches on its stomach blue and blue forwards would surely feast on blue and black tonight. The crowd, at this point on their feet - even the normally passive South Standers – were in shock at what they were watching and began their ‘Caaaaaardiff’ yawp. Onward, inches from the line. Blue and black arms flailing and flapping. Finally, Smiler dabbed the ball down for the score. Time and patience. One running down, one developed. Robinson taking on the kicking duties after Blair had been seemingly trodden on at the bottom of a ruck, rather deflatingly missed the conversion. 31-23. 20 mins to go.

The Ultimates now had the momentum they craved, focused and finger pointing, while congratulatory blue and black arse patting was no longer in evidence. But much energy had been spent, and on 60 minutes, both teams made wholesale changes. For the Dream XV, on came Holmes, Norris, Phillips, Rowlands and Judd replacing Edwards, Griffiths, Humphries, Quinnell and Roberts. For the blue and blues, Chicken, Sam, Bradley Davies and Dillon Lewis jogged on, and off went Nicky, Navidi, Teeeeeeeeeeeee-to and Filise. For which side would the bench toll?

Holmes impact was immediate, as the All Blues tried to run the kick-off back, Roberts was clattered back and moments later it was Rush's turn to taste the black rubber of the 3G. The half-man, half-house had made his mark. Inexplicably the ringleted Norling, who hadn't really been noticed in the second period, penalised Holmes for not rolling away.

As play moved up to the blue and black 22 the Ultimates cut the lineout and placed Rush in midfield. For the first time in the game their resemblance to Easter Island was on full show. Off the top ball allowed the player they call the X-Man to make huge inroads. Quick ball from Tomos to Bradley Davies then allowed Chicken to streak through. Somehow, he failed to convert his own effort, agonisingly missing the kick as he tried but failed to imitate John's crossbar choreography. 31-28.

What a last 10 minutes we had in store. Time and patience now more than ever working against each other. The forward exchanges became increasingly brutal, with Phillips, Rowlands, Warburton and Rush all prominent. Captain Scott was hit late in the air, but just got up and grinned, urging his forces onwards, knowing that they were near the end, and that he had not and would not lose his good cheer.

A clean take from the restart by Cook and a sublime soft off-load to Warburton saw the Ultimates drive up to the Dreamers 22, hugging the touchline all the way. Their driving maul was brought down, but illegally so according to the flamboyant Norling, whose increasingly frenetic arm signals now resembled something out of Studio 54, Charles Street branch. Up stepped the saviour of Bilbao once again. Could he make amends for his missed conversion? He certainly could and, reminiscent of that famous day, again dissected the posts with nonchalant ease from wide-out. Five minutes were remaining. Scores were level. 31-31.

This time the restart was fumbled and knocked on, unaccountably by Rush. But by now, bodies and minds were tired, and both teams were making mistakes. The crowd simply did not know who to support any more. From the resulting scrum, the blue and blacks mounted a period of unrelenting pressure, but each charge and each shake and shimmy were ruthlessly cut down by the bigger men of the Ultimate XV. Lloyd came on for Tomas in an effort to mastermind the dying moments and secure field position for the All Blues. But in their over-eagerness, another hairline knock-on at the base of ruck, verified only after Norling had consulted with Bevan, gave the blue and blacks, playing towards the pavilion end, one last shout, just inside the All Blues 22.

The packs, ignoring the niceties of crouching and setting, thundered into each other- but, in a piece of throwback officiating, the finely groomed official just waved ‘play on’. Under extreme pressure, Holmes’ pass to John was not a good one, enabling the Ultimates’ back-row to fly up in the face of the one true King and almost certainly make it game over. But then it was Cardiff v. Heathen Turks 1970 all over again. A little feint, a slight dummy, and then steady, before striking the sweetest of drop goals that was still on the up as it passed through the middle of the posts, to be caught effortlessly by an excited Chris Norman on the top deck of the pavilion. And that was it. Time, in more ways than one, was up and the Dream XV had won the closest of encounters 34-31.

All players are equal, but some players are more equal than others. At the final whistle, the players looked from blue and black to blue and blue, and from blue and blue to blue and black; but already it was impossible to say which was which. Despite the Barbarian-like score, the match had been brutal and spent bodies littered the pitch, having to be escorted off and away from the multitudes of spectators who had invaded the sacred, albeit synthetic, turf. Those present unanimously agreed that man of the match was King John, whose sangfroid, craft and sullen art had secured a last minute win in the keenest of contests.

The Ultimates retired to the home changing room fashioned from the concrete bowels of the South Stand, while the Dreamers opted for the baths and rustic cosiness of the wooden pavilion. Soon, comrades in arms once again, both would come together to partake of the splendid feast assembled by Babs Filer in the Sir Gareth Edwards Lounge, pleasantly devoid of any hospitality types on this day of days.

After emotional speeches, Danny Davies led the assembled heroes in a rendition of his composition, ‘A Jolly Football Team’. The Hennessys then chipped in with a particularly moving version of their No.1 hit, ‘Cardiff Born, Cardiff Bred’, as indeed all were on this magical evening. Then, with emotions fit to burst, a tanned, Beach Boy lookalike Kruger took centre stage with ‘We are the Best Team, the Blue and the Blacks’; with some irony, it was the All Blues who sang it the loudest, perhaps demonstrating their greater familiarity with this particular tune.

With the ranks now swelled by the massed voices of the Arms Park Choir and Cor Y Gleision, the musical celebrations went on long into the night, culminating in multiple choruses of that well-known Disney classic, ‘It’s the same team after all’. Unsteady, in a corner, Richard Burton harmonised with Colin Howe and C.S. Arthur, the gravelly bass of Jonah Lomu offering a superb counterpoint. 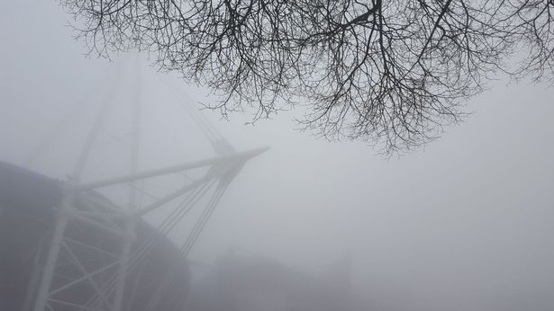 Gradually, the fog that had enveloped the city earlier in the day returned, this time a real peasouper. An eerie silence fell around the beloved Arms Park, the flood lights extinguished, the lights in the Westgate Street flats growing ever dimmer.

One-by-one, the older players slowly and literally disappeared into the night. Their last tackles made; their final passes thrown. They now belong to history, and the memories of old men. But, the imprint of every run they made on the Arms Park is still there. You just have to look hard enough. They’re never really gone.