WHY BLUE AND BLACK? 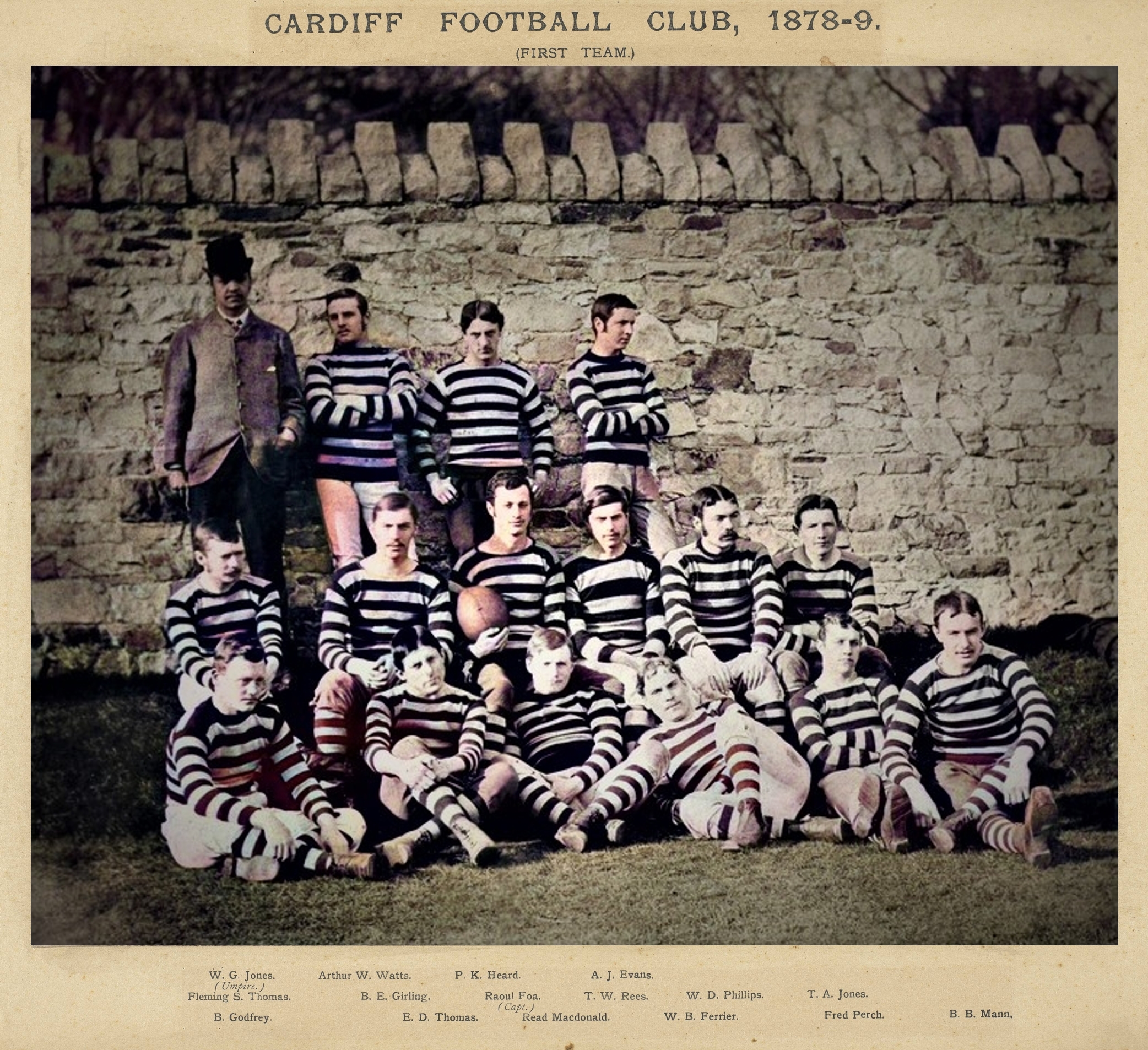 The earliest Cardiff team photo we have, was taken prior to the 1879 South Wales

Challenge Cup final. The club had been created three years earlier, from a merger between Glamorgan FC and Cardiff Wanderers. That game was, to that point, easily the biggest in the club’s short history.

It was a game against Newport, already great rivals, and had been heavily advertised beforehand. A huge crowd turned out. There were no stands to put them in, but thousands watched from behind the ropes that separated them from the playing field. Nothing like this had happened before in Cardiff. It was the first big game.

Looking at that photo now, the players pictured before the wall that once encircled the Arms Park, you can’t help wonder what was going through their minds.

Some look fidgety, probably caught in a moment when they wanted to get on with playing the game. In the back row, AJ Evans looks away to his left, disinterested in the camera.

Maybe he was watching the Newport team arriving. Next to him, PK Heard glares into the camera, like he’s ready to have a fight. He probably was.

These men had joined this club because they loved playing rugby football and being recorded for posterity wasn’t uppermost in their minds. Others like Fleming S Thomas look pensive. A big crowd was waiting for them. This hobby of theirs had become an event a quickly growing Cardiff was pinning its civic pride on. Even in 2020, players get nervous before big games. In 1879 it would have been a completely new, daunting experience.

But sat between the club captain, Raoul Foa and WD Phillips (a man later to become known as “the father of the club”) is a man with his gaze fixed toward the camera. It’s a firm, confident look. Comfortable with his own importance, and in his own ability. It’s a look that carries the sense of a man understanding that he is creating a legacy, and that in the years to come we will be looking back at him.

This man was Thomas Williams Rees. As a player, perhaps not the finest. But in a way, one of the most important in Cardiff rugby history.

Because the other thing that makes him stand out is his jersey. The rest of the players wear jerseys with thin hoops. His are noticeably wider. This is presumably because his jersey wasn’t manufactured in Cardiff, like the others. In fact, strictly speaking it wasn’t a Cardiff jersey at all. But it was the jersey all the others were based on.

It was a Gonville and Caius College jersey. Their colours were, as they still are, Cambridge Blue and Black hoops. Rees had learned the game at Rugby School itself before going on to Cambridge and playing in inter college matches. When moving to Cardiff, he’d brought the jersey with him.

Cardiff’s predecessors, the Glamorgan club, had played in a dark blue jersey with red trim.

But the new Cardiff club had first chosen to play in black, with a large skull and crossbones badge. It’s unclear why they opted for such a striking design. Perhaps it had been the jersey used by the Cardiff Wanderers club. We’ll never know, as the colours used by that antecedent club are lost to time.

However, we do know that soon, the club decided to scrap the self-consciously rakish Pirate design, and opt for a Cambridge Blue and Black jersey, modelled on the one Thomas William Rees presumably wore while training.

Why that jersey? The early Cardiff players had learned the game at a variety of different public schools and universities. It seems likely that many of them were linked to Cheltenham College. Why then did the club not model its colours after Cheltenham? It seems likely there would have been more than one Cheltenham jersey present at the early informal matches played on the Arms Park.

Perhaps it’s because of Rees’s links to Rugby school. What better way to establish the club’s dedication to rugby football over association football than to wear the jersey of a man from Rugby school itself?

Or perhaps it was to underline the club’s links to an institution as prestigious as Cambridge? It’s said that the parents of players were concerned that the Pirate jersey conveyed the wrong image. What better way to convey the right image than to use a design connected to Cambridge University?

A myth has grown up over the years that the club’s first jerseys were dark blue and light blue, in honour of both Oxford and Cambridge Universities. This isn’t true. But, particularly in those very early days, Cardiff has rarely been afraid to present a slightly posher identity than any other Welsh club.

Or maybe the players just liked the colours?

Whatever the reason, we know what blue and black meant to the players in that photo.

Because we know why they started the club.

“I feel sure sir, that if only one club (and not two, as before) was established, it would be able to hold its own against any club in South Wales or the West of England.” (from a letter by “A Football Player”, published in the Western Mail, 8th September 1876)

“....let me add that all trivial obstacles should be set aside in the endeavours to form one good club, which shall be an honour to the town….” (from a letter by “Another Forward”, published in The Western Mail, 14th September 1876)

That’s what the ‘blue and black’ meant to those men. They were the colours they had chosen to spread the name of their club, and everyone it represented, far and wide. The blue and black was the face these ambitious, confident young men wanted to show to the world.

And that’s the way it stayed. None of us are old enough to remember those men. But those of us who grew up watching men in blue and black at the Arms Park shared their vision of what the jersey means. It means excellence. It means taking on the world. And it means style.

One other thing to mention about that photo. Although the players are pictured against the walls of Cardiff Arms Park. The game was actually played at Sophia Gardens. The Arms Park’s landowner was unhappy at “mischief” taking place at the Arms Park and reluctant to keep opening it up for the rugby team.

The club was only really able to truly thrive once the landlord understood that a strong Cardiff rugby team was in everyone’s interests.

A club united to form “one good club” at the Arms Park, with all, including the landlord, moving forward with one purpose. To take on all comers and win.

It was the way ahead when we first decided to pull on blue and black jerseys. It still is.

Note: This article would be impossible without Gwyn Prescott’s excellent “This Rugby Spellbound People”. Anyone wanting to read more about the early years of Cardiff rugby should start there.